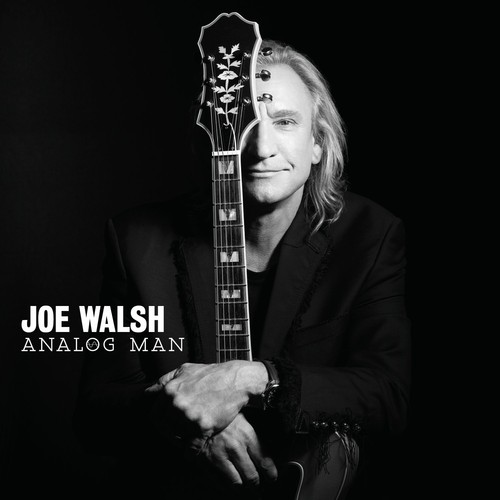 "It's been 20 years and I have a lot to say," said Walsh. "These songs come from the heart." Walsh, best known for his powerful guitar licks, joined the Eagles in 1976 and is credited for bringing a harder rock sound to the band with the acclaimed Hotel California, The Long Run and Eagles Live. A singer-songwriter and Rock and Roll Hall of Fame inductee, Walsh has entertained for more than four decades, not only as a solo artist, but as part of admired bands like The James Gang and Barnstorm.

As a self-proclaimed Analog Man, also the album name and title track, Walsh refers playfully to the new digital age; one in which he has adapted to, but notes in the song, "I am what I am - I'm an Analog Man." Walsh developed the album over the last 10 years, drawing on personal experiences to breathe life into each track. "I just really feel like it's all come together and finally I feel like a complete person and a complete musician," said Walsh. "I think there is some confidence in there that I never had. That's what I was hiding." Walsh credits his wife of four years, Marjorie, for encouraging him to be the man and artist he is today and fondly dedicates this album to her.

The 10-track album was produced by Jeff Lynne and Joe Walsh with Tommy Lee James co-writing some of the tracks. "Lucky That Way," one of Walsh's favorites off the album, speaks to the extraordinary life he's lived, even through the hurdles, and features Ringo Starr, his real life brother-in-law, on drums. The song ironically serves as a mature sequel to Walsh's famed "Life's Been Good" and for Walsh, life is just that.