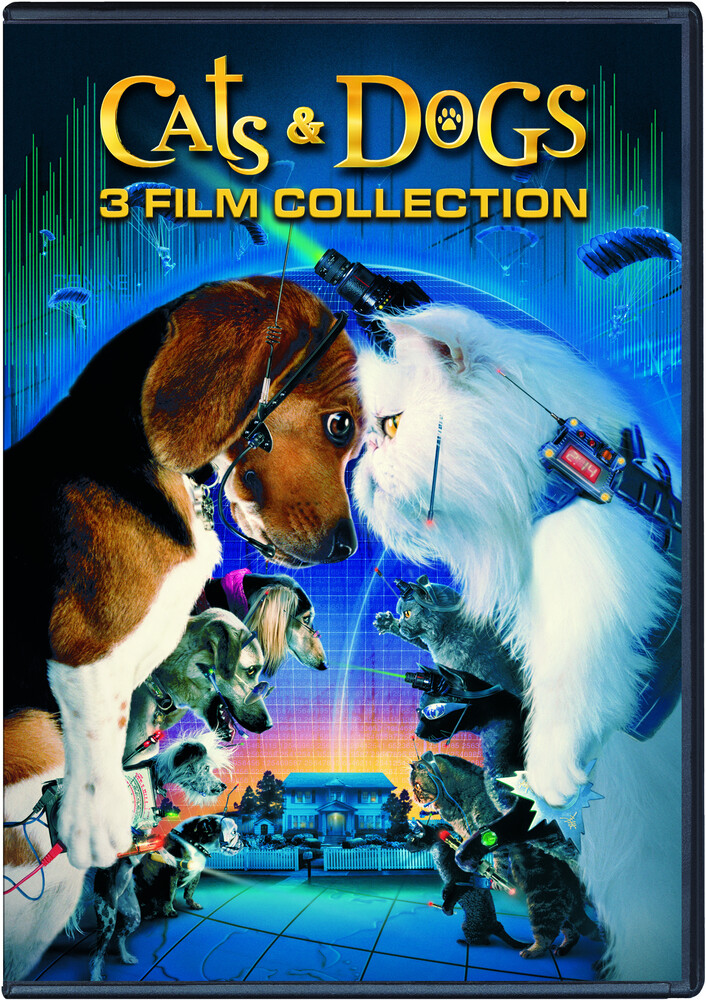 Cats and Dogs 3-Film Collection includes the family favorites: Cats & Dogs Cats & Dogs: The Revenge Of Kitty Galore Cats & Dogs 3: Paws Unite. Cats & Dogs 3 Cats & Dogs: The Revenge of Kitty Galore In the eternal battle between cats and dogs, one crazed feline has taken things a paw too far. Former elite agent Kitty Galore has gone rogue and plans to unleash a diabolical device designed to not only bring her canine enemies to heel but also to take down her former kitty comrades and make the world her scratching post. Faced with this dire threat, cats and dogs must work together for the first time ever to save themselves and their beloved humans from global cat-astrophe. This fantastically fun adventure features the voice talent of Christina Applegate, Michael Clarke Duncan, Neil Patrick Harris, Sean Hayes, James Marsden, Bette Midler and Nick Nolte and stars Chris O'Donnell and Jack McBrayer. Cats & Dogs Comedic action-adventure that mixes live action with cutting-edge CGI and animatronic effects. "Cats & Dogs" uncovers the truth about the high-tech, secret war being waged in neighborhoods everywhere that humans aren't even aware of: an eternal struggle between the two great armies of Cats and Dogs. The story follows a Cat plan to destroy a new vaccine that, if developed, would destroy all human allergies to Dogs, and the Dogs' efforts to stop the Cats from executing their plan. It's been ten years since the creation of the Great Truce, an elaborate joint-species surveillance system designed and monitored by cats and dogs to keep the peace when conflicts arise. But when a tech-savvy villain hacks into wireless networks to use frequencies only heard by cats and dogs, he manipulates them into conflict and the worldwide battle between cats and dogs is BACK ON. Now, a team of inexperienced and untested agents will have to use their old-school animal instincts to restore order and peace between cats and dogs everywhere.