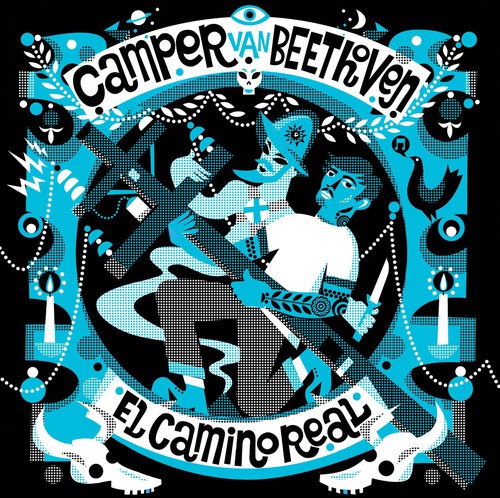 Indie rock stalwarts Camper Van Beethoven are back with El Camino Real, the companion album and follow up to their highly lauded La Costa Perdida. Whereas La Costa reflected the northern California back to the country side of the band with lush and trippy references to Jack Keruac, Richard Brautigan, The Beach Boys and Big Sur , the songs on El Camino Real are firmly rooted in a grittier earth one that lies beneath the southern half of the state and stretches all the way down to Baja California.

Produced by the band and recorded in various studios and living rooms, El Camino Real s harder sonic edges capture the sounds of an entirely different road trip from Bakersfield through the Inland Empire and beyond the border to Mexico. The lineup remains Victor Krummenacher, Greg Lisher, David Lowery, Jonathan Segel and Michael Urbano.

Music historians will note that despite the band s extended residency in Santa Cruz and parts north, Camper Van Beethoven actually formed in Redlands, California a semi-urban, multi-cultural polyglot landscape populated by a host of characters brought to life by the angular notes and dry observations of El Camino Real. Similarly, the songs Camp Pendleton, Dockweiler Beach, I Live in LA and Sugartown evoke a particular view of life in said regions.

Says David Lowery: The best way to look at the new album is to draw a contrast between the two. On La Costa Perdida the ocean is calm, benevolent and feminine; on El Camino Real the sea is filled with darkness, secrets and chemicals.