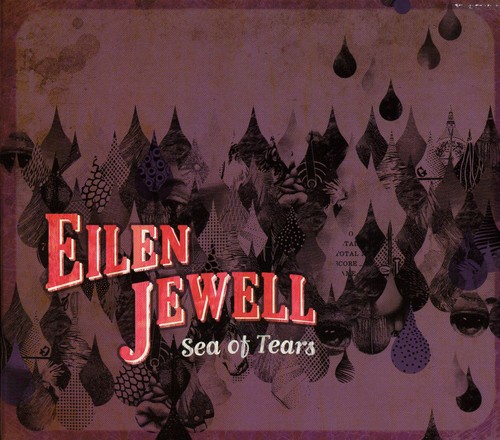 Boise-born and Boston-based, Jewell has quickly distinguished herself as one of the rising stars of a new generation of roots musicians. Her first two albums, Boundary County (self-released, 2006) and Letters from Sinners and Strangers (Signature Sounds, 2007) were astonishingly assured efforts, which matched Jewell's understated yet insightful songs with a rugged blend of Americana styles. They were met with a great deal of acclaim, with No Depression raving that "Jewell is showing she can wander with the best of them, and write riveting song-stories about her adventures along the way." Indicative of Jewell's strong following in Europe, The Word in the UK described her as "A voice of real distinction [that] manages to transcend some powerful influences and pierce the fog long enough for her own point of view to emerge." With Sea of Tears, Jewell and her longtime band of Jason Beek (drums, harmony vocals), Jerry Miller (electric, acoustic, and steel guitars), and Johnny Sciascia (upright bass) wed her elegantly unflinching songwriting with a rustic, pre-Beatles swagger that encapsulates vintage R&B, Midwestern garage rock, Chicago blues, and early rock and rockabilly, while maintaining the haunting, folk-inspired purity that first made her an artist to watch. Together for almost four years now, Jewell's basic band has been variously augmented on their previous albums, and formed the heart of the American gospel supergroup the Sacred Shakers, who released a self-titled album on Signature Sounds in 2008. Sea of Tears, however, features just the core quartet, a conscious decision on Jewell's part to keep the sound lean and, in it's darker moments, daringly stark. The absence of fiddle, heard prominently on Letters from Sinners and Strangers, actually widens the band's range - allowing them to move seamlessly between genres, even to combine styles more fluidly than previously. To this sound, Jewell responds with nine original songs that boldly stare down rejection, denial, and change. The intensity and urgency felt throughout the record is partly owed to Jewell's chosen subjects and partly to the uncluttered, unencumbered recording process. These songs were finished in the brink of time, and mostly delivered to the band on the eve of the sessions, leaving no time for the performances to become rote. "Last year I did a lot of hotel writing, coming up with bits and pieces," Jewell says. "I think I work well under pressure, and if I'm not under pressure I don't work at all! I don't need the pressure of an album to start songs, but I need it to finish them." "I had a dream about the title track," she recalls. "and when I woke up, I was able to remember my dream and the song wrote itself. I wish I could have more dreams like that..." "Sea of Tears" wraps a bitter, confrontational missive in a sinuous, sultry groove punctuated by Miller's slashing guitar. In the role of a woman ignored, Jewell doesn't howl - she looks the object of her affection straight in the eye and plainly, firmly states that without him, "It's gonna be a sea of tears for me / It's gonna be a life of misery." The effect is disarmingly powerful - an unadorned but undiminished statement of single-minded devotion. "I was never in a real rock band," Jewell shyly reflects. "But I was in a pretend one when I was seven. We had cardboard instruments." As witnessed on Sea of Tears, Jewell approaches rock'n'roll like any other American hybrid - balancing the defining elements of the style with her steadfast integrity and never altering her approach to cater to the medium.