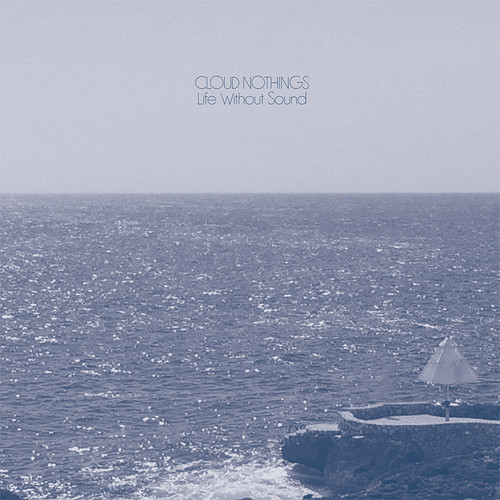 Dylan Baldi maintains simple, admirable standards in quality. “A thing I like to do with all of my records is drive around with them,” the 25-year-old Cloud Nothings frontman says. “In high school, I would listen to music for hours like that: just driving through the suburbs of Cleveland. And if it sounds good to me in that context and I can think of high school me listening to it and saying, ‘That’s okay,’ I feel good about the record. This is the one that’s felt best.” “This” is Life Without Sound, the radiant, far-far-better-than-okay fourth full-length his rock outfit has recorded since he began writing and releasing songs on his own under the Cloud Nothings alias in 2008. While its highly acclaimed predecessor—2014’s Here and Nowhere Else—came together spontaneously, in the little time that touring allowed, Life Without Sound took shape under far less frenetic circumstances. For more than a year, Baldi was able to write these songs and flesh out them out with his bandmates—drummer Jayson Gerycz and bassist TJ Duke—before they finally joined producer John Goodmanson (Sleater Kinney, Death Cab for Cutie) at Sonic Ranch in El Paso, Texas, for three weeks in March of 2016. The result is Baldi’s most polished and considered work to date, an album that speaks to his evolving gift with melody while also betraying the sort of perspective that time provides. You can hear it in the aerodynamic guitar pop of “Modern Act,” and feel it in the devastating wisdom of “Internal World,” a lullaby-like howler that dwells on “the fact that being yourself can be uncomfortable and even potentially dangerous at times.” “Generally, it seems like my work has been about finding my place in the world,” Baldi says. “But there was a point in which I realized that you can be missing something important in your life, a part you didn't realize you were missing until it's there—hence the title. This record is like my version of new age music,” he adds. “It’s supposed to be inspiring.” It is. Limited deluxe LP on green marble vinyl; special embossed jacket; includes exclusive poster and audio download.