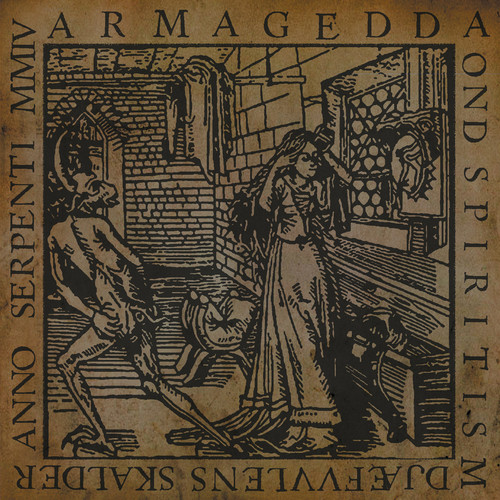 On the 15th anniversary of it's original release, Armagedda presents a proper reissue of their third and final album, Ond Spiritism.Pillars of the early 2000s black metal underground, Sweden's Armagedda exuded an authentically ancient air despite their youthful years. The black metal underground back then was a purer, more traditionalist iteration of what it is today, and within that staunchly ideological landscape did Armagedda prove their fiery intent with their 2001 debut album, The Final War Approaching, and more so with it's follow-up in 2003, Only True Believers - the title itself a statement of intent, naturally. Alas, as many passionate young men are won't to do, the duo of A. and Graav became restless with the shackles of supposedly "true" black metal and began plotting their next move, one that would drive deeper into the true heart of "black metal" whilst exhibiting the unorthodoxy of approach that once endeared the genre to sonic revolutionaries.That next move came in 2004, with the release of Ond Spiritism. Even at first glance did Ond Spiritism look like a seismic shift: here, presenting a stark and austere face to Armagedda, not inconspicuously suggesting their own revolution. A radical rethink in tone and texture, Ond Spiritism begins in confrontationally minimalist mono, reverberating the quasi-deathrock leanings of Graav's contemporaneous LIK project - and then it literally explodes into 3D focus, all shimmering grime and martial stridency. Armagedda previously proved they could extract every last purist thread of Darkthrone's landmark 1992-1994 period; with the largely mid-to-downtempo Ond Spiritism, the duo worked within a minimal-is-maximal template that only slightly suggested black metal, whereby they finessed forth huge, hanging chords that revealed deeper truths between those notes - literally, a wider canvas on which to roam by paradoxically restricting it's expression. Black metal has long endeavored to say "more with less," but with the boundlessly strict Ond Spiritism, Armagedda tackled far deeper themes of belief and The Beyond, all in their rich timbre of their native Swedish tongue.Upon it's initial release, Ond Spiritism found Armagedda amongst the first furtive movements of the "spiritual black metal" idiom taking root in the wake of foundational albums by Antaeus, Watain, and Deathspell Omega. Increasingly restless, following that album's release did Armagedda plan a moniker change and a further departure from black metal's now-shackling traditionalism. But alas, Ond Spiritism proved to be the band's epitaph, as it's two primary members prolifically pursued various projects, including LIK, LĂ¶nndom, Whirling, and Saiva among others.
This website uses cookies to personalize content and analyse traffic in order to offer you a better experience.
I accept Learn More
back to top