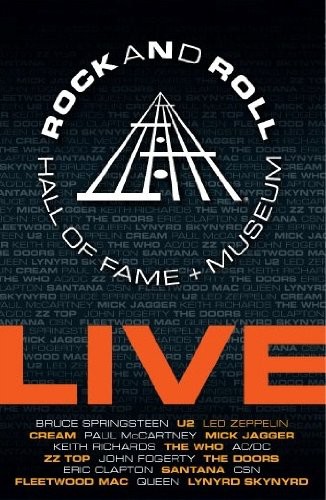 Rock and Roll Hall of Fame Live is a 3-DVD set featuring rare, one-of-a-kind performances from the Rock and Roll Hall of Fame induction ceremonies, filmed over the past 24 years since it's start. The biggest names in rock 'n' roll perform in intimate settings, jamming in combinations not seen anywhere else. Plus, the DVDs feature exclusive, anything-goes induction speeches by rock royalty, along with rare behind-the-scenes footage. You'll see Bruce Springsteen and Bono share a microphone on U2's "I Still Haven't Found What I'm Looking For"; Mick Jagger and Tina Turner perform a sultry duet on the Stones' "Honky Tonk Women"; the original 3 members of Cream take the stage for the first time in 25 years for a blistering "Sunshine of Your Love"; and a jaw-dropping version of the Beatles I Saw Her Standing There with George Harrison, Ringo Starr, Bob Dylan, Bruce Springsteen, John Fogerty, Mick Jagger and Billy Joel. The incredible list of artists and jams goes on and on... for nearly a quarter century, the Rock and Roll Hall of Fame has honored the music's most influential figures at prestigious black-tie induction ceremonies where performers and audience alike let down their hair and rejuvenate themselves through exciting, once-in-a-lifetime performances. Rock and Roll Hall of Fame Live captures all the excitement of those ceremonies, from the wise and witty speeches, to the most incredible combinations of talent ever assembled on a single stage. This unprecedented collection celebrates rock's glorious history like no other video document. Viewers will be blown away....and will love every minute of it.