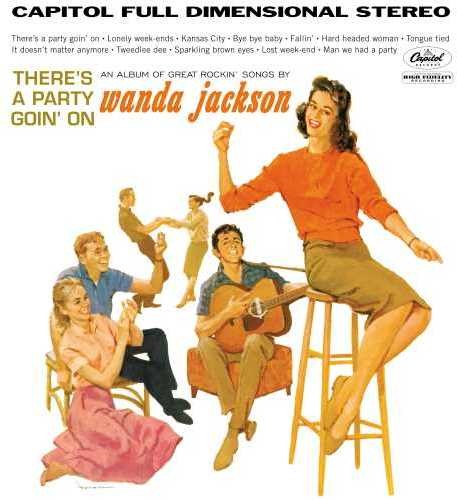 There's A Party Goin' On
Artist: Wanda Jackson
Format: Vinyl
New: Call 919.821.7766 or Email us to purchase or check availability

Vinyl LP pressing. There's A Party Goin' On is an album that bridged the gap between rock and country and was the first of it's kind in the 50's. Wanda Jackson is an American singer, songwriter, pianist and guitarist who had success in the mid-1950s and 1960s as one of the first popular female rockabilly singers and a pioneering rock 'n' roll artist. She is known to many as the "Queen of Rockabilly" or the "First Lady of Rockabilly". Jackson mixed country music with fast-moving rockabilly, often recording them on opposite sides of a record. As rockabilly declined in popularity in the mid-1960s, she moved to a successful career in mainstream country music with a string of hits between 1966 and 1973. She had a resurgence in popularity in the 1980s among rockabilly revivalists in Europe and younger Americana fans. In 2009, she was inducted into the Rock and Roll Hall of Fame in the category Early Influence.