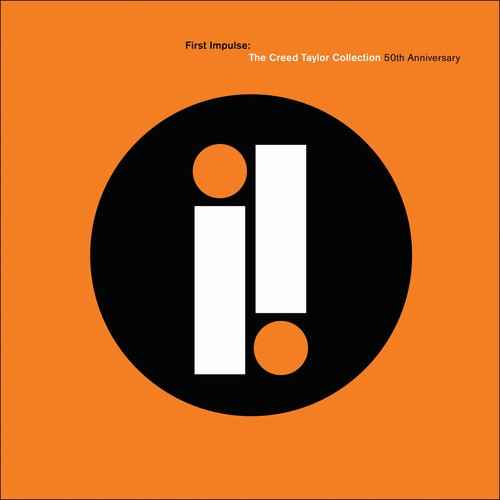 Veteran music producer Creed Taylor launched the legendary Impulse label 50 years ago, wrapping his classic artists and music in a definitive look and an instantly iconic logo. First Impulse: The Creed Taylor Collection, an exciting 4-disc collection includes all six albums produced by Taylor for the label that proudly wore it's signature colors of orange and black on it's spines plus rare tracks including unreleased John Coltrane rehearsals. The accompanying 84-page hardbound book features essays by Taylor and Ashley Kahn, author of the House That Trane Built, the best-selling book on Impulse!, and the set's associate producer, as well as session photos and reproductions of original LP artwork. The six Taylor-produced albums in the set are: Ray Charles's Genius + Soul Jazz, which will be inducted into the Grammy Hall of Fame in 2011: John Coltrane's Africa/Brass, the label debut of the great artist who would have been 85 in September; Gil Evans' Out of the Cool; Oliver Nelson's Blues and the Abstract Truth; along with two albums by trombonist Kai Winding, the Great Kai & J.J. (with J.J. Johnson) and the Incredible Kai Winding Trombones, both on CD in the U.S. for the first time. The impressive collection includes such radio hits and jazz anthems as Charles' One Mint Julep (the rare mono single version is also included at Mr. Taylor's request) ; Coltrane's 'Africa, Evans' 'La Nevada and Nelson's Stolen Moments, plus rare alternate takes and unused performances that offer a comprehensive look at the diverse range of music recorded during the label's first six months. First Impulse: The Creed Taylor Collection also features a remarkable discovery: previously unavailable performances by John Coltrane originally recorded in a demo session 50 years ago for Africa/Brass. The three performances include the standard Laura and two original compositions by Cal Massey, who arranged the session: The Damned Don't Cry (later recorded at the Africa/Brass sessions) and 'Nakatini Serenade, a slower version than the one Coltrane recorded for Prestige in 1958. From 1961 through 76. Impulse was an important part of a pivotal, fertile period in jazz history. Through the exciting and rapid changes of the 'GOs and 70s, Impulse Records was arguably the most effective label bringing the exciting world of jazz to a new generation of listeners.