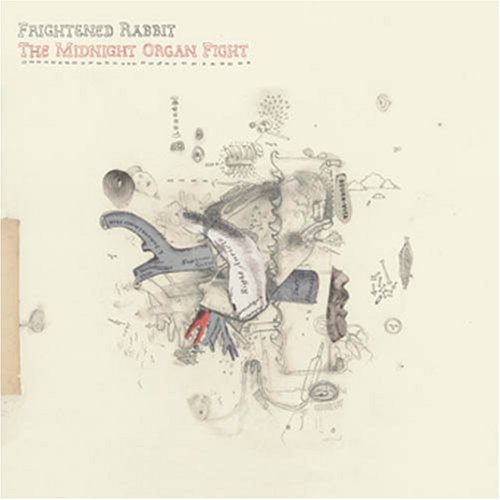 They call themselves Frightened Rabbit, but there's nothing shy or timid about this Glasgow trio. On The Midnight Organ Fight, singer/guitarist Scott Hutchison says what he thinks--what he feels--and he doesn't hold anything back. That doesn't make the follow-up to 2006's Sings the Greys a difficult or painful listen. It's cathartic. In "The Modern Leper," Hutchison laments that "a cripple walks among all you tired human beings," while in "Good Arms vs Bad Arms," he admits that "I might not want you back, but I want to kill him." For all the unvarnished honesty, a cautious optimism shines through, particularly on the ebullient "Old Old Fashioned," within which he suggests, "We can get old, old fashioned just like they did in '43!" Aside from their keen melodic sense, the musicians alternate between acoustic strumming and electric thrumming; fast songs and leisurely ones, like the Simon and Garfunkel-ish "Poke.” Though the Glaswegians have their own thing going on, they still bring a few other acts to mind, particularly the Shins, Arab Strap, and indie-era Snow Patrol. Followers of those more established entities will find an equally appealing, if pricklier sensibility at play throughout this Fight.

''The Midnight Organ Fight'' is the second studio album by Scottish indie rock band Frightened Rabbit, released on April 15, 2008 through independent label Fat Cat Records. Upon release, the album was greeted with widespread critical acclaim. Vocalist, guitarist and songwriter Scott Hutchison describes the album as being "quite relationshipy" and "a lot more intense" than its predecessor ''Sing the Greys'' (2006). Following the album's completion, it took around a month for Hutchison to be able to listen to it. The album's title comes from a line in the song "Fast Blood", and is said to be a "euphemism for sex." - Wikipedia