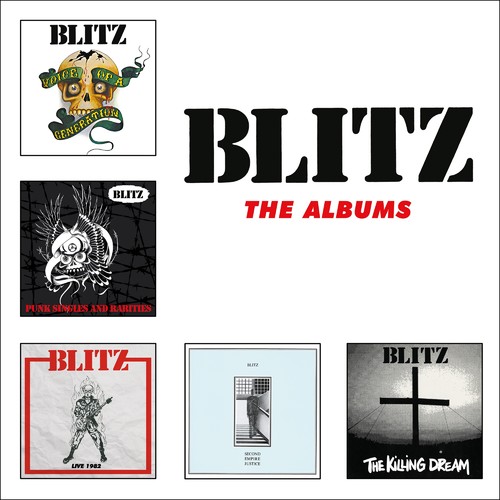 UK five CD clam shell box set featuring everything released by punk legends Blitz. Disc One is the seminal Voice Of A Generation album which hit #27 in the UK National Charts as well as topping the Independent Chart. Disc Two is a 29 track collection of non LP singles, B-sides and compilation cuts including the Indie Chart hits 'Someone's Gonna Die' (#3), 'Never Surrender' (#2), 'Warriors' (#2) and 'New Age' (#4). Disc 3 is a rare In Concert live recording from 1982. The fourth disc is the #5 Indie Chart album Second Empire Justice which now features the 'Telecommunication' and 'Solar' singles as a bonus. The fifth and final disc is the band's 'comeback' album from 1990 The Killing Dream. Now restored to it's original track listing and running order. The 20 page booklet comes complete with detailed liner notes, pictures of all relevant record sleeves and memorabilia and clippings from the era. Rancid, Roger Miret & The Disasters, Judge and Oxymoron are just some of the bands who have recorded versions of Blitz songs and their influence is still strongly felt on the punk scene to this very day.