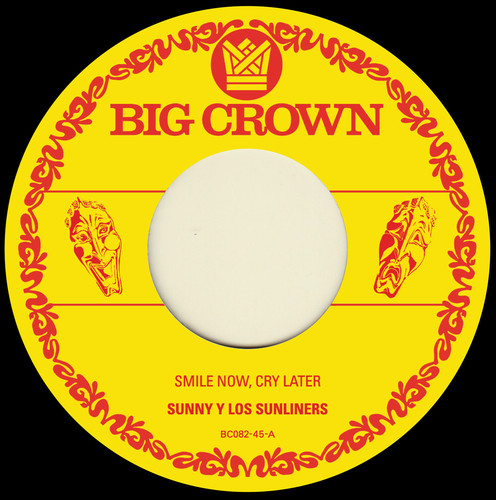 Smile Now Cry Later / I Only Have Eyes For You
Artist: Sunny & The Sunliners
Format: Vinyl
New: In Stock $11.99
Wish

When it comes to Chicano / Lowrider Soul there are a few people who are credited as the founders of the genre, Sunny & the Sunliners are one of them, if not number one on that list. Similarly, when it comes to the tunes that define the genre, Smile Now, Cry Later is undoubtedly the anthem. The A side "Smile Now, Cry Later", is a tune written by Sunny about his girlfriend at the time's amazement of the difference between the man on stage and off. However, it went on to become a one-liner and a symbol of the Lowrider Soul culture. An absolute classic tune amongst Sweet Soul lovers, and also something of a slogan of the Lowrider Soul community which is tattooed on thousands and thousands of people along with the theater mask artwork from the LP cover. The B side, Sunny's cover of The Flamingos "I Only Have Eyes For You" is a must have for the Slowie fans. Having never been pressed on 45, it rounds out this record amazingly. The plugside a big tune for Sunny that has seen pressings on at least four different label variations and the B side something that even the deepest collectors of the genre will have to pick up so they can spin.