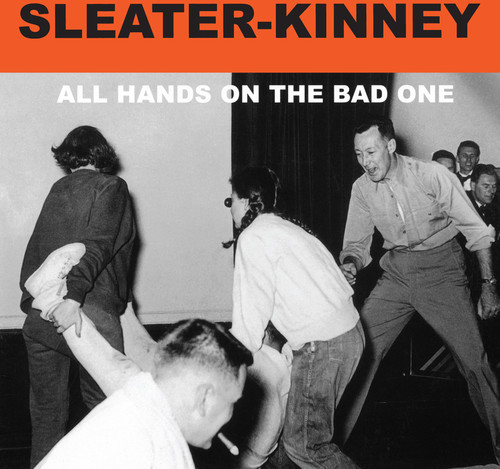 All Hands On The Bad One [Remastered]
Artist: Sleater-Kinney
Format: CD
New: In Stock $14.99
Wish

Sleater-Kinney switched gears on their follow-up to the challenging, introspective The Hot Rock, delivering their brightest, most accessible album to date with All Hands on the Bad One. That's partly due to a renewed assurance in craft -- the arrangements here are the most refined of the group's career, and their performances the most polished. Corin Tucker seems to be in complete command of her voice as an instrument, delivering her most nuanced vocal performance to date. Tucker and Carrie Brownstein's guitar interplay is up to their usual standard of intricacy, but instead of wildly careening off one another, the two mesh more seamlessly than they ever have. Plus, drummer Janet Weiss had been honing her skills as a backup vocalist, and the group makes full use of that extra instrument, packing the tracks with lilting three-part harmonies. Yet all of this craft and control shouldn't be taken as evidence that Sleater-Kinney has toned down the passion that makes them so exciting. Even if All Hands on the Bad One isn't as desperately cathartic as their previous records, there's a contagious exuberance in the performances, and the band is absolutely brimming with confidence and vitality. Though the record still covers serious political and emotional topics, its overall aura is best summed up in "You're No Rock n' Roll Fun," a bouncy, playful jab at snobby scenesters unable to remember the good times at the core of so much great rock & roll. Not only is All Hands on the Bad One Sleater-Kinney's most consistent overall set of songs since Call the Doctor, it's also evidence that the band has taken that philosophy to heart.