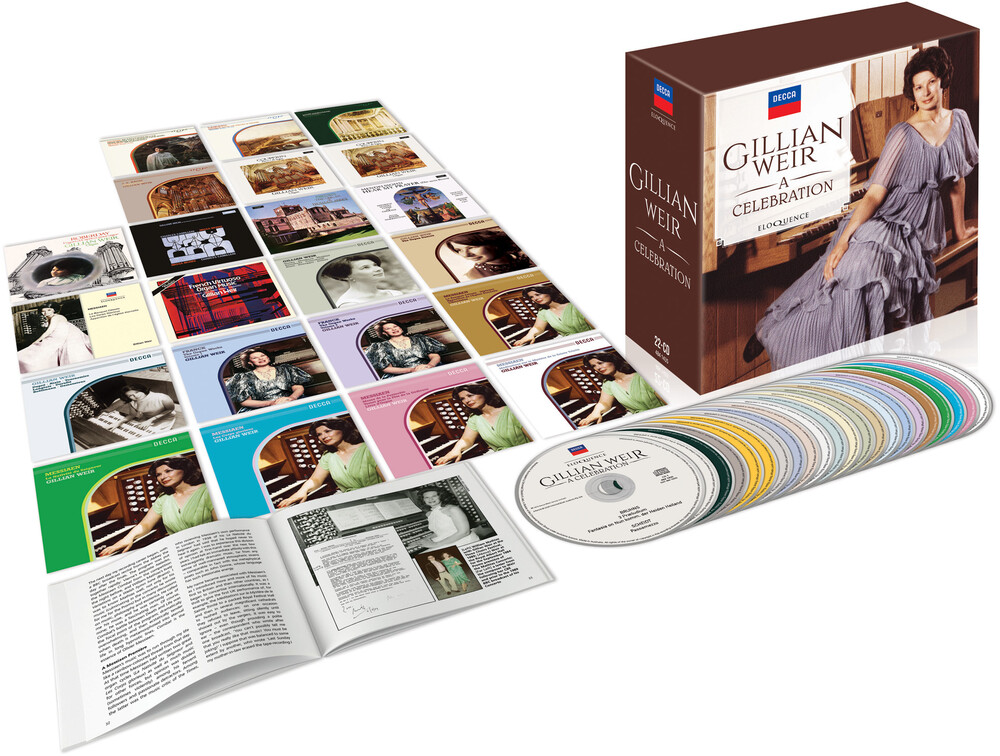 'Weir is to the organ what Heifetz was to the violin, and Casals to the cello - a phenomenon,' pronounced the celebrated broadcaster John Amis. Fittingly, this is a 22-CD celebration of the doyenne of organists - Dame Gillian Weir - on her 80th birthday (17 January 2021) spanning her illustrious career of nearly five decades. It presents Gillian Weir's complete Argo recordings, selected recordings on other labels that have reverted to her, and most enticingly, no fewer than ten discs of previously unpublished BBC radio broadcasts - selected by Dame Gillian. The first twelve CDs in the set are made up of studio recordings and the remaining ten CDs comprise previously unpublished recordings of BBC broadcasts. (Note: the BBC recordings are not included on digital services for streaming or download.) The set features sixteen organs from six countries and includes a 13,000-word booklet includes informative introductions to the recordings, with Gillian Weir's reminiscences and amusing anecdotes from the recording sessions and from her encounters with composers such as Olivier Messiaen and William Mathias. Highlights of this compendium include: ashowpiece recital of dazzling Toccatas and Fantasias from the French organ tradition opening and closing with spectacular pieces by Marcel Dupré, the epitome of the French organist-composer tradition, a recording of Charles Camilleri's breathtaking Missa Mundi, one of many pieces written for and premiered by Gillian Weir a stunning disc of pieces by Messiaen recorded at the Royal Festival Hall, London in 1966, shortly after she won First Prize at the St. Albans International Organ Competition a recital on the beautiful organ of Hexham Abbey, built by Dame Gillian's late husband, Lawrence Phelps, no fewer than ten discs of previously unpublished BBC radio broadcasts - selected by Gillian Weir, including the complete organ works of César Franck, recorded on the magnificent Cavaillé-Coll organ of Saint-Sernin, Toulouse, a thrilling "Proms" recital from The Royal Albert Hall, London of music inspired by dance, the then-complete works of Messiaen recorded in 1979 at the The National Shrine of the Immaculate Conception, Washington, DC, on the organ chosen by Messiaen himself for the première of one of his monumental works, Dame Gillian's recital from St. Albans Abbey recorded the day after winning the St. Albans Competition, and a recital of French music drawn from three individual programs.