Here is an official statement on the sudden and shocking passing of Tommy Keene.

Thanks to everyone who has sent along their kind messages, texts, posts and calls during this very difficult time. It's still really hard for me to believe and digest that he is gone. We had so many plans in 2018 and were going to talk this weekend about a timeline. His last message to me said "call anytime I am usually up late working on new songs" which I could not wait to hear more about.

I have no idea where we go from here but I am beyond proud to have released 5 albums and one double album compilation with him in just under 12 years. We had recently retained the rights to the first album we did together (Crashing The Either) and discussing plans to press it on Vinyl for the first time ever.

His music and his kind soul will live with me forever and I owe everything to him, as it was a scary, risky and daring move to break away 10 years ago and start my own company and I could not have done that without his loving support.

He was truly a special person not just in my life, but in many of our lives which is so apparent tonight with all of the beautiful posts and remembrances. it is helping me cope so thanks for everyone who has posted something about his life, music and untimely and tragic passing.

Rest in peace, Tommy Keene, Love you TK! forever and always. Thank you for the gift you gave all of our lives. 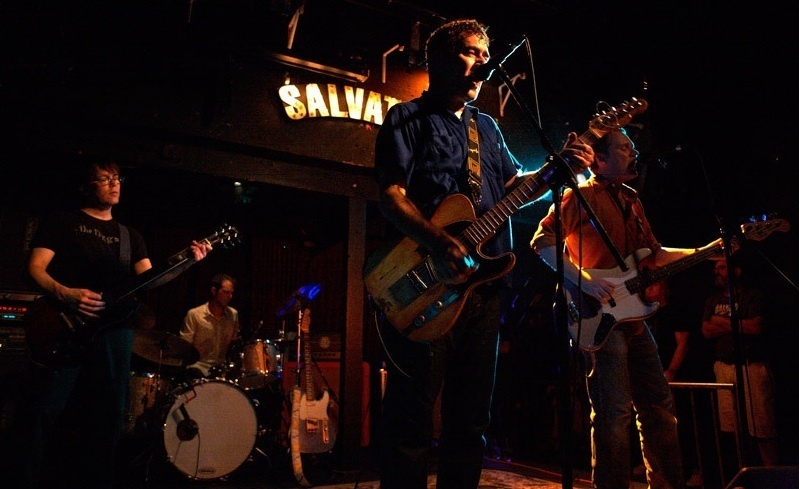 After nearly 30 years in the music business, you might expect someone like Tommy Keene to start slowing down. If you did, you’d be wrong. Produced by Tommy in his home studio, with able assistance again from R. Walt Vincent (Pete Yorn), Tommy’s new Behind The Parade (Second Motion) continues his career-long run of premier, melodic guitar-based rock, following up 2009’s stellar In The Late Bright with yet another batch of winning tunes.

Ranging from the proto-Keene jangle of “Already Made Up Your Mind” and the edgy, power pop (no, he doesn’t mind that description – much) storytelling of “Running For Your Life” and “His Mother’s Son” to the moody, ambient instrumental “La Castana” and the horn-infused opener “Deep Six Saturday”, Behind The Parade finds Tommy ably taking a few risks while managing to play to his considerable strengths. Behind The Parade, along with his recent output, shows Tommy is akin to an athlete rediscovering his prime-only in his case, he never left it.

In 1984, a six-song platter of pop perfection titled Places That Are Gone (Dolphin) put Tommy Keene onto the CMJ charts and atop the Village Voice EP of the Year poll. Blatantly romantic, unapologetically melodic, bittersweet but absolutely invigorating, it was the sort of record that you could put on before you went out on a Saturday night, or sit around and mope to if you didn’t feel like facing the world. It still stands as a powerful statement, not only establishing Tommy as a unique singer-songwriter, but also as a guitarist with a sound as distinctive as Pete Townshend or Johnny Marr.

Tommy made enough noise in the early ’80s to get the majors involved, and in 1986 he released Songs From the Film on Geffen. Produced by Beatles engineer Geoff Emerick, the album featured two MTV videos, “Listen To Me” and a re-recording of Places That Are Gone’s title track, and spent 12 weeks on Billboard’s Top 200. The 1998 CD reissue of Songs also includes one of the all-time great Keene rockers, “Run Now,” with inspired rhythm section work from drummer Doug Tull and bassist Ted Niceley, plus a terrific extended guitar solo. The singer as well as the song appeared in the Anthony Michael Hall movie Out of Bounds. Rent it today and catch Tommy’s 15 seconds of celluloid glory.

After releasing the Run Now EP in 1986, the original Tommy Keene group, which also included guitarist Billy Connelly, disbanded. Without a group, Keene headed down to Ardent Studios in Memphis to record with producers John Hampton and Joe Hardy. The result was Based on Happy Times (Geffen, 1989).

As suggested by the bittersweet title, Happy Times is the darkest album in the Keene catalog. Although his best material has always been infused with melancholia, Happy Times’ tracks like “The Biggest Conflict” and “A Way Out” reveal a more fatalistic outlook. The guitars are heavier, there is less jangle, and there aren’t as many hooky vocal harmonies. Unlike much of his earlier work, Based on Happy Times by no means can be tagged with the dread title of power pop. It is a beautifully crafted, if sometimes brooding, arty rock record.

Based on Happy Times would also be the first time and, so far, last time Keene would work with another songwriter on an album. “When Our Vows Break,” written with Jules Shear, has long been a live favorite and is one of the record’s standout tracks. The album’s leadoff track, “Nothing Can Change You,” can be heard as a cover version by the Goo Goo Dolls on the B-side of the Australian version of their single, “Slide.” And while we’re name dropping, R.E.M fans should note that Peter Buck appears on two tracks, lending some Marc Bolan-style guitar on the Beach Boys cover, “Our Car Club,” and mandolin on “A Way Out.” In support of Based on Happy Times, Keene put together a new rhythm section, John Richardson on drums and Brad Quinn on bass, and hit the road for a month-long tour with the Replacements. The tour found the Keene group playing for receptive audiences and would eventually lead to Tommy joining Replacements leader Paul Westerberg as a sideman on Westerberg’s 1996 solo tour.

In 1996, Keene released Ten Years After (Matador), his first full-length album of all-new material in seven years. Produced by Keene and recorded by pop music wunderkind Adam Schmitt, the album contains classic pop hooks and the loudest guitars to date. The album probably comes closest to the sound of a live Tommy Keene show, which, if you’ve never seen one, can be a pretty thunderous affair.

While Ten Years After revealed that Keene had stored up a lot of creative energy in the years between full length LPs, his next effort, Isolation Party (Matador), showed that he could do just as well if not better on much shorter notice. Released in 1998, Isolation Party is more focused than its predecessor (Perhaps due to its being recorded over a few months as opposed to a few years). For the album, Tommy recruited an all-star cast, getting some fine instrumental and vocal performances from former Gin Blossom Jesse Valenzuela and Wilco’s Jay Bennett and Jeff Tweedy. The album’s opener, “Long Time Missing,” ranks among the best songs he’s ever written, and that’s saying a lot when put in the company of “Back To Zero,” “My Mother Looked Like Marilyn Monroe,” “Highwire Days,” and “Silent Town,” all of which, coincidentally, can be heard in sizzling versions on Keene’s next effort, a live disc called Showtunes (Parasol), released in 2000.

Tommy followed up his live album in 2001 with The Merry-Go-Round Broke Down for the SpinArt label. Produced by Keene and recorded primarily in Tempe, Arizona, at the Gin Blossoms outpost, the album leads off with the rousing rocker “Begin Where We End” before branching out into some new terrain with the roadhouse boogie of “Man With Out a Soul” and the 16-minute opus, “The Final Hour.”

Tommy used his next release, Drowning: A Tommy Keene Miscellany (Not Lame), to clean out his closets of 20 years’ worth of rarities, demos and unreleased sessions. One of the best hodgepodge records you’ll ever hear, more than one critic felt Tommy’s spring-cleaning LP bested many greatest hits packages.

Back on the road in 2004, Keene and band joined Guided By Voices on the East and West Coast legs of their farewell tour. Apart from some great gigs, the shows also led to Keene joining Pollard as a member of his post GBV band, The Ascended Masters, for their 2006 U.S. Tour and a limited edition live LP, Moon (Merge).

The year also saw the release of Crashing the Ether (Eleven Thirty), which was performed and recorded primarily by Tommy himself at home with drums by John Richardson and contributions from regular Keene band members and friends. Sonically, the album is dazzling, with big drums and open, ringing guitars. Lyrically it was arguably Tommy’s great leap forward, with subject matter ranging from a nostalgic, black and white snapshot of New York to Warren Beatty to mixed signals via “Texas Tower #4.”

Tommy quickly followed up Crashing the Ether with Blues and Boogie Shoes. an LP with Robert Pollard under the Keene Brothers moniker. Although side projects can sometimes be less than wholehearted efforts, tracks such as “The Naked Wall” or “Death of the Party”—as good a song as Keene or Pollard have written together or separately—show that neither artist was holding anything back. Among the LPs many rave reviews, The Big Takeover magazine called the album a magical “balancing act” between Keene’s straightforward songwriting and Pollard’s more outré moments.

In October 2008, Tommy joined Pollard again as a member of Boston Spaceships, touring in support of the album Brown Submarine.

2009’s In the Late Bright displayed the full range of Tommy’s songcraft over 11 tracks. The album kicked into high gear with “Late Bright,” a minor-key rocker that gets its tense and dramatic work done in two minutes flat. From there on out, the album delivered a fan-friendly collection of melodic hooks, vocal harmonies, inventive chord progressions and great guitar playing.

Though by no means nearing the end, Tommy summed up his solo output with Tommy Keene You Hear Me: A Retrospective 1983-2009 (Second Motion), a two-CD collection holding over 40 of his best tunes (including an unreleased acoustic take of Crashing The Ether’s “Black And White New York”). Even then, fans debated what he included vs. what he left off – further proof of the man’s enduring songwriting prowess.